Pampanga politicos fight it out for Pinedas’ blessings 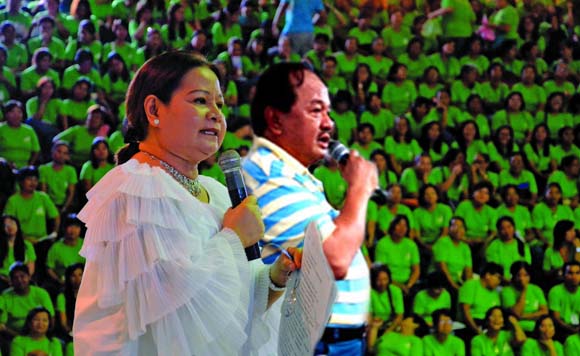 It all boils down to the blessings of Pampanga’s “Nanay” and “Tatay”- incumbent governor Lilia Pineda and her husband Bong.

Mabalacat City vice mayor Christian Halili admitted that without the influential couple’s support, any local candidates running for election in 2016 have no fair chance of winning.

“It really all depends on the support of Governor Nanay and Tatay,” Halili was quoted in an article in Punto! Gitnang Luzon.

The vice mayor pointed out that the Pinedas’ wide network and financial resources are crucial to a candidate’s so-called “winnability.”

The Pineda patriarch himself, Rodolfo “Bong” Pineda, has long been rumored to be a “jueteng lord” and has been investigated numerous times by the Senate.

Halili admitted he is seeking the Pinedas’ blessings to be the Kambilan party’s mayoralty candidate next year.

“But I suppose there is the principle of the equity of the incumbent so the mayor (Marino “Boking” Morales) would have to be the official candidate of the Kambilan,” he said.

Kambilan stands for “Kapanalig at Kambilan deng Memalen Pampanga”, which was organized as a local party in 2012 in time for the 2013 elections.

Most Pampanga politicians ran under the local party chaired by the governor.

“And all have ‘close coordinative links’ with the governor, and with ‘with equal access to Capitol programs and projects’,” the Punto! Gitnang Luzon wrote, citing an unidentified mayor as a source.

In Angeles City, contending mayoral candidates, incumbent Mayor Edgardo Pamintuan and Vice Mayor Vicky Vega, were reported to be claiming to be under the patronage of the Pinedas for the 2016 elections.