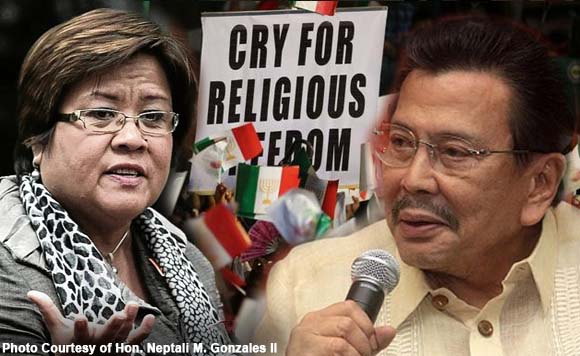 Manila Mayor Joseph Estrada is claiming that the Iglesia Ni Cristo will not get any fair shake from the Department of Justice unless Leila de Lima resigns to run for senator.

In his column, Philippine Star columnist Federico Pascual said: ” Estrada could not help noting that Justice Secretary Leila de Lima, the object of the INC protest, had shown a selective disposition in handling the illegal detention complaint filed by a suspended INC minister against his superiors in the church.”

“There are older important cases – such as the criminal prosecution of the killers of the 44 members of the PNP Special Action Force massacred last January in Mamasapano, Maguindanao – that De Lima set aside in favor of rush action on the INC case,” added Pascual.

In his interview with Pascual, Estrada explained that the rally permit he granted to the INC protest rally at the Padre Faura gates of the DOJ office  was not a special accommodation to the religious sect.

Estrada claimed that he was not taking sides in the illegal detention case filed by expelled INC Minsiter Isaias Samson against the INC’sSanggunian members led by Glicerio Santos Jr.

Estrada said that he granted the INC permit “in recognition of citizens’ right to peaceably assemble to ventilate their grievances.”