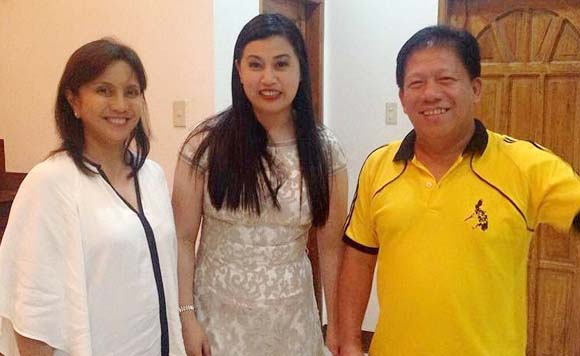 After expelling Camarines Norte Gov. and provincial chairman Edgardo “Egay” Tallado for “grossly immoral acts” that “tarnished the good name and reputation of the party as a whole” last June 15, 2015, the Liberal Party (LP) has picked  other politicians to run for the province’s top posts in 2016.

The LP has appointed Rep. Leni Gerona-Robredo (3rd district, Camarines Sur) as “interim provincial chair” of Camarines Norte to help stabilize the situation after 500 LP members supportive of Tallado went on mass leave from the party.

Vice Gov. Jonah Pimentel, the vice chair of the LP Camarines Norte chapter, led six mayors of the 12-town province in declaring their continuing support for Tallado and going on mass leave in late June 2015. After three weeks,  the LP is in the process of poaching members from other parties it is allied with. It has retained third-term Daet Mayor Tito Sarion, who was earlier declared “persona non grata” by the Tallado camp.

Unico Jr. and Barcelona-Reyes are said to be cousins. Mayor Sarion recently told the regional newspaper Bicol Standard that Rep. Barcelona-Reyes will run for governor, himself for vice governor and Unico for congressman in the province’s first district.

This means that Tallado has a voting base in six towns while the new LP members in Barcelona-Reyes and Unico have six of their own. That would change if Rep. Panotes joins the LP.

That essentially means that at this time, the LP lost some and gained little in the current situation of Camarines Norte.