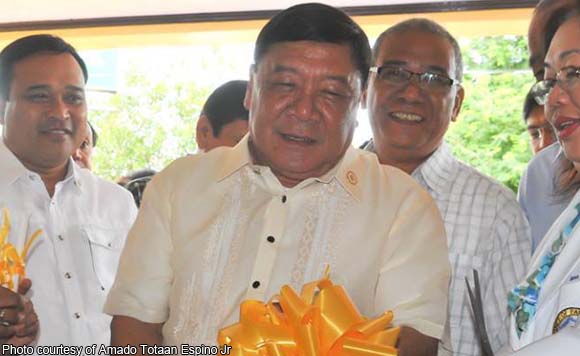 Pangasinan Gov. Amado Espino, Jr. has filed 12 counts of libel against four Dagupan-based radio commentators for a series of alleged malicious attacks against him, ranging from vote-buying allegations to using his own sick mother for propaganda.

Charged were Lina Cervantes, Macky Delgado, and Tito Tamayo, all of dwPR Power Radyo Asenso; and Ike Palinar of dwCM Aksyon Radyo Pangasinan, according to a report from Sunday Punch.

In his complaint, the governor said Cervantes accused him of engaging in vote-buying and “dagdag-bawas” in the 2013 elections, amassing ill-gotten wealth, and involvement in quarrying, jueteng and black sand extraction activities.

The governor also cited Cervantes’ commentary on tree-planting and alleged kickback in the P30-million budget appropriated by the provincial government to the Liga ng mga Barangay provincial federation headed by his son Amado III, for purchase of service vehicles.

Espino said in an interview at dwIZ that in all the 14-hour broadcast of dwPR, its announcers said nothing good about him for the past months.

The station dwPR is owned by the Cojuangcos.

Espino’s son, Amado III, has announced his intent to run against former Pangasinan Rep. Mark Cojuangco in the gubernatorial race in 2016.
Espino and Cojuangco used to be close political allies until their relationship turned sour when Cojuangco announced in February 2014 his gubernatorial plan.

Espino is in his third and final term as governor.

“My honor, reputation, my name are most precious in my life. Those are the only ones I could leave as legacy to my children and grandchildren and you would destroy my name? Huwag naman,” the governor said.