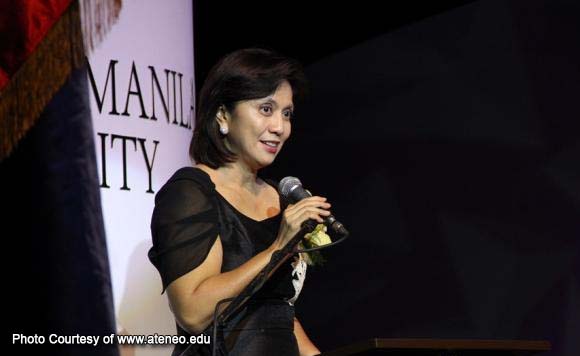 Camarines 3rd District Rep. Leni Robredo is still “unripe” for a national position and needs more experience in politics, at least for her daughter Tricia.

Speaking at the Tsinelas Leadership Awards at the University of the Philippines (UP) in Quezon City, the 21-year-old Tricia played down growing public clamor for their mother to run either as senator or running mate of Liberal Party (LP) presidential bet Mar Roxas.

“She just had one term in Congress… I know a lot of people do that, I know people run for president without having experience with politics… We don’t want that she is still not ripe for the post. We’re talking about the country. It’s not a classroom that we just say we elect you as president,” Tricia was quoted by Philippine Star as saying.

The middle child of Leni and the late interior secretary Jesse Robredo said they never doubted their mother’s dedication, only that she is still unripe for a higher office.

“We know it’s a big responsibility… I saw how dedicated she is. She is very committed to learn. She had done a lot in the past three years. But if you’re going to ask… I think she needs more experience,” Tricia said.

She stressed that she and her two other siblings do not want their mother to run for a national position but pointed out that it is a decision their mother has to make in the proper time.

Tricia said a national position is “too much.”

“We love Secretary Mar with all our hearts… we’d help Secretary Mar in any capacity. We can do anything to help except for our mother to run for a national post such as the running mate of Secretary Mar,” she said.

Politiko would love to hear your views on this...
Post Views: 1
Tags: Jesse Robredo, Leni Robredo, Liberal Party, LP, Mar Roxas, University of the Philippines, UP