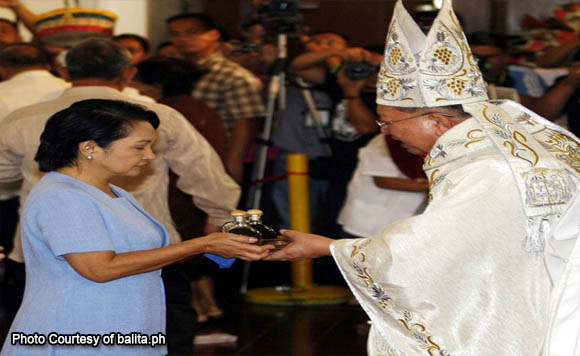 Bishop Emilio Marquez of the Diocese of Lucena has asked President Aquino to allow former president and incumbent Pampanga 2nd District Rep. Gloria Macapagal-Arroyo to be placed under house arrest out of “mercy and compassion.”

In his homily at a mass celebrating the 137th birthday of President Manuel L. Quezon in Lucena City, Marquez said Aquino should follow the example of previous presidents.

“He is a Catholic, he is a Christian. It behoves upon him to show mercy and compassion,” the bishop said in a Manila Bulletin story.

Marquez also issued the same call before the Catholic Bishops’ Conference of the Philippines during their recent meeting in Manila.

He pointed out that 2015 being a year of “mercy and compassion,” the Aquino administration should heed the clamor to grant house arrest to his predecessor.

She is under hospital arrest at the Veterans Memorial Medical Center (VMMC) since October 2012.