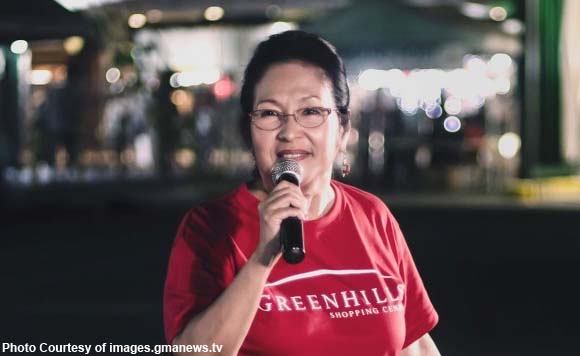 San Juan City Mayor Guia Gomez cannot make up her mind yet on who to support for the presidential race in 2016.

But in a Manila Times story, Gomez, a partner of former President Joseph Estrada and mother of Sen. Joseph Victor “JV” Ejercito, said she wants Senator Bongbong Marcos to run for President.

“I like him [Marcos]. Magaling siya and he’s intelligent,” she was quoted as saying.

Gomez said the senator has an impressive track record.

She clarified, however, that Marcos is still not her “top choice” for the presidency. Her family, she said, is choosing between Vice President Jejomar Binay and Senator Grace Poe

“If he [Bongbong] runs for President, we will also consider him,” Gomez stressed.

Still, Gomez said she is still not closing her doors on Mar Roxas, whom she described as a “good choice” as a presidential candidate.

“We will look at their respective credentials, programs in government, and what they can do for our country,” she said.