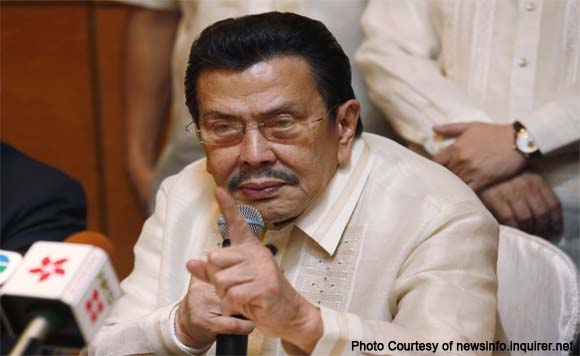 SM is protesting the three percent increase, from 0.2 percent, in business tax rates implemented in Manila since 2014 and has found an ally in the person of De Lima, who had the ordinance voided, according to Victor Agustin in his column “Cocktales”.

Agustin quoted De Lima as saying that the Manila council exceeded the 10- percent limit on any rate increase imposed by the Local Government Code, upholding the SM appeal that the new tax rates were “confiscatory and in restraint of trade.”

Pacheco said Estrada should first appeal De Lima’s decision before her office and thence, after another repudiation, elevate the issue to Malacanang before seeking relief from the judiciary.

Pacheco was the counsel of the bankrupt Orient Bank and developer Jose Go of Ever-Gotesco, according to Agustin.

However, in its decision last week, the Court of Appeals (CA) remanded the case back to Pacheco.

The CA justices scolded the Manila judge, saying he could not dismiss such a paramount case “on such flimsy and tenuous ground” as prematurity.

Besides, the Local Government Code was quite specific in stipulating that the remedy from the decision of the DOJ secretary lies with “a court of competent jurisdiction,” which obviously is not the Office of the President as Pacheco had ruled, the CA explained.

The appellate court ordered Pacheco to re-hear the case “with dispatch.”