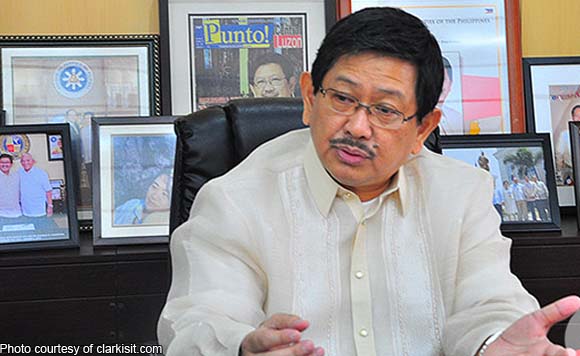 An irate Angeles City Mayor Edgardo Pamintuan has called the Department of Finance (DOF) “lazy” for failure to update the income and expenditures of the city.

Pamintuan took exception to DOF’s claim that Angeles City is one of the cities that have not increased its Real Property Tax (RPT) for the last 18 years.

The reelectionist Angeles mayor pointed out that he was the only mayor in 1995 that complied with the Local Government Code provision of RPT “reassessment.”

He said that it was during his term that an increase in RPT was implemented.

He added he has even recently ordered a reassessment in compliance with the three-year period required by the law.

“They say that once the mayor sits, he would increase the RPT. No. If after three years you don’t need an RPT hike, then don’t),” Pamintuan said.

Following an Internet connection failure on June 20, the mayor claimed that the local government submitted to the finance department a hard copy of the city’s income and expenditures but the DOF rejected it.

“On June 20 the internet bogged down but they received it on July 30. It’s already August and they haven’t corrected it and they included us in the list,” the mayor lamented.

In its tax watch advertisement released on Wednesday, the DOF stated that Angeles is one of the 19 cities and eight provinces that failed to report the required electronic Statement of Receipts and Expenditures (eSREs) for the second quarter.

The DOF requires all provincial, municipal, and city treasurers to submit the eSRE for the second quarter not later than July 20 pursuant to Department Order Number 08-2011.