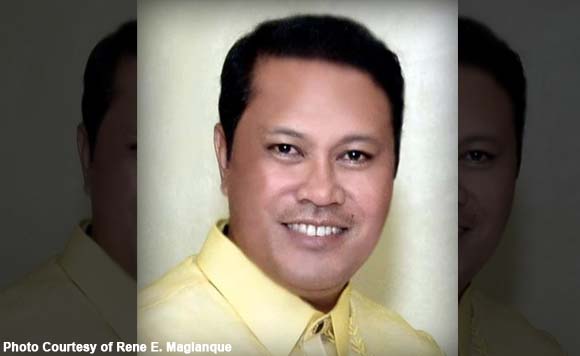 Candaba, Pampanga mayor Rene Maglangue, who was once described by whistleblower Sandra Cam as the “biggest jueteng bagman” of former president Gloria Macapagal Arroyo, will run for reelection in 2016.

Maglangue, in an article in Sunstar, said he has many “progressive” plans to implement if he wins another term, such as converting the Poblacion area the center of trading in the province.

In fact, he boasted he has started programs to address the area’s flooding problem.

The former assistant secretary of the Department of Transportation and Communication (DOTC)           also bared plans to put up the Candaba Community College and continue giving financial assistance to high school and college students of the town.

Running as independent, allegedly after the Liberal Party (LP) disowned him, Maglangue won his first term in the 2013 elections. He beat Nacionalista Party’s bet, Reynaldo Sagum, by a margin of only 288 votes.

Sagum filed an election protest but the San Fernando City Regional Trial Court dismissed it for lack of evidence of any irregularity in the vote-counting.

Maglangue later admitted it was only “Jimmy” whom he invited to his oath-taking. He denied knowing Janet Lim Napoles, the alleged pork barrel scam mastermind.

In a Manila Standard story on October 14, 2013, Cam described Maglanque as “the biggest jueteng bagman” and an “untouchable operator and troubleshooter in the Arroyo administration who managed to cross over to the Aquino clique.”

Cam said Maglanque was Napoles’ associate in the DOTC, where he was assistant secretary.