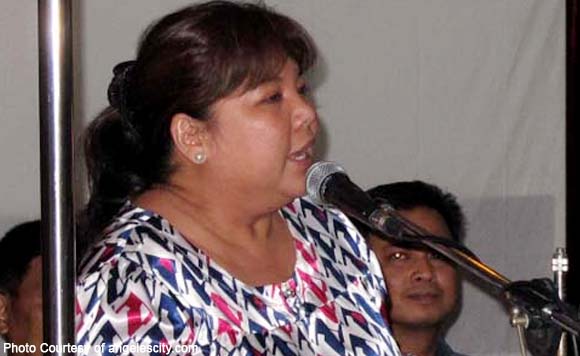 A sad Angeles City Vice Mayor Vicky Vega-Cabigting has decried what she said was a “black propaganda” being waged against her.

Cabigting, who has declared she will run for mayor next year, was “rejected” by leaders of various women’s groups in the city to replace incumbent mayor Ed Pamintuan.

The vice mayor revealed she sought out some of the women leaders and three of them that she personally know have denied making such statements in a local newspaper.

“As soon as I read the article, I pondered on what to do. I decided to check on these people to find out if they are real,” the vice mayor was quoted in a story published by Punto! Central Luzon.

One of the leaders, Beth Palasigue, was a high school  batch mate, Cabigting bared.

“I remember telling her to be careful because she works at the city hall. You might lose your job if you get identified with me. She told me ‘Okay, I know what to do.’ So when I saw her name as one of the seven, I was surprised,” she recounted.

Palasigue is the president of Northville 15 Women’s Group.

Cabigting also narrated that she met with another leader in Barangay Salapungan who and was told she never uttered such words against her.

“She said, ‘Ala ku pung sinabing makanyan (I didn’t say anything like that)’,” Cabigting quoted the leader as saying.

The third women’s group leader she sought out also denied making such statements, she added.

“I am still trying to locate the other four to talk to them. But suffice it to say the three women whom I have talked to don’t realize that they were used and were not aware what was written about them,” Cabigting said.

“I was even told by my husband ‘Why bother with these?’ But I want to seek the truth behind the story,” she went on to say.

Both Cabigting and Pamintuan ran under the same local party PAK/ABE (Partido Abe Kapampangan) in 2013 but eventually parted ways.