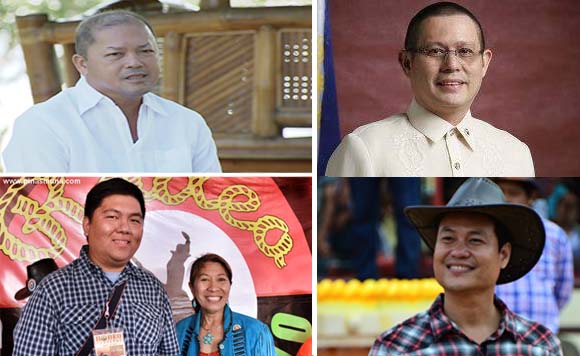 An acquitted murder suspect, an incarcerated governor, a son-in-law of an assassinated congressman, and an acting governor are vying for the gubernatorial post of Masbate in the 2016 elections.

And this seemingly colorful cast of characters has started to worry a group of Masbateños who fear that next year’s elections in the island province will, again, be a bloody one.

In a meeting with the provincial police, the Masbate Advocate for Peace (MAP) sought help in curbing the perennial problem of election-related violence in the province.

“It’s been 50 years that political violence has been going on in Masbate. Before, the PNP and Army were used by the politicians as goons. There are four personalities interested in the gubernatorial post all equipped with machinery,” MAP chairman Igmedio Camposano was quoted as saying by The Manila Times.

Kho was implicated in the murder of Masbate Rep. Moises Espinosa, Jr. in 1989 when he was the mayor of Cataingan town. He was acquitted in 2005.

In 1995, he was also charged – and later acquitted in 2006 – with the slaying of Espinosa Sr.’s brother, Masbate Rep. Tito Espinosa.

Llanete, the elected provincial governor, is currently in jail facing trial for her alleged involvement in the pork barrel scam.

Bravo, on other hand, is the son-in-law of the slain Tito Espinosa.

Currently in power is Vice Gov. Revil, who was designated as acting governor in Llanete’s place.

“Today we’re apprehensive with the attitude in Masbate that whenever there are promising new leaders in the province and in the municipalities the so-called elimination or ‘purging’ of emerging leaders is being done along the way for the new generation of leaders not to thrive,” the MAP leader said.

Camposano pointed out said that the “worst case scenario” in Masbate is that there would be more election-related violence such as killings and the proliferation of private armed groups.

MAP’s concerns are without basis:  Every election period, the province is placed under Commission on Elections control as a political hotspot because of the high incidence of election-related violence.