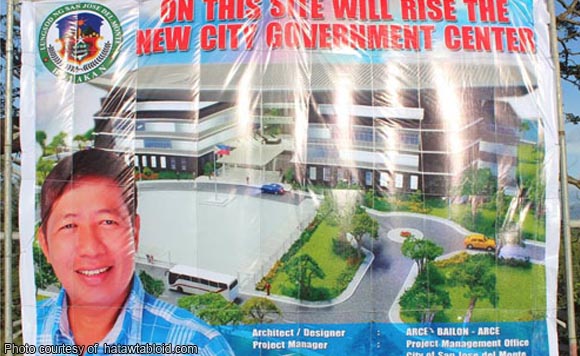 Beleaguered San Jose Del Monte (SJDM) City Mayor Reynaldo San Pedro has denied any irregularity in the construction of a government building in the city, and instead pointed to the city council as the one behind it.

San Pedro pointed out that the City Government Center project in Barangay Dulong Bayan underwent a regular bidding process and was scrutinized and approved by the city council.

“It was the City Council that approved the adoption of the ‘Green Design’ as the motif of the government center,” the mayor was quoted by Manila Bulletin as saying.

San Pedro, along with other city officials, has been charged with plunder for the alleged overpriced building construction.

The complaint was filed by Councilor Romeo Agapito.

According to San Pedro, the city council approved the terms of reference relative to the consulting services amounting P14.5 million for the master planning and detailed engineering and P285.5 million for the construction of the project.

In his complaint, Agapito accused San Pedro and other respondents of double procurement of consultancy services that resulted in the spending of P14.5 million. He said the building was overpriced by at least P21 million in violation of procurement laws.

Assistant City Administrator Bayron San Pedro said that until now, Agapito has not presented any signed documents to prove any wrongdoing on the part the mayor.

“The rivals of Mayor San Pedro are now using ‘pawns’ to besmirch the good reputation and performance of our city executive,” he said.