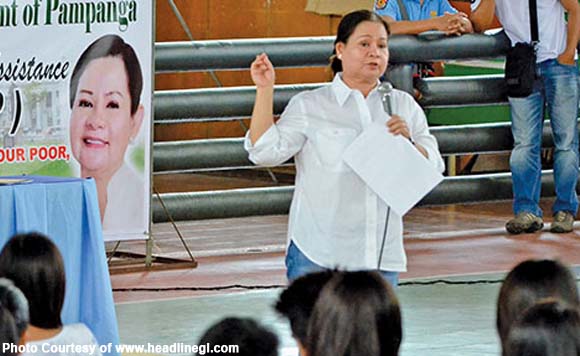 Pampanga Gov. Lilia Pineda is elated after President Aquino recognized the provincial government in his last State of the Nation Address (SONA).

Aquino has cited Pampanga’s healthcare programs, particularly its efforts to provide coverage to indigents who have been given PhilHealth cards during the past five years of the Pineda administration.

In reaction, the Pampanga governor thanked PNoy for recognizing the provincial government and for taking care of the sick.

Pineda even appeared in a video presentation shown during the SONA, where she stated where the Sin Tax goes, majority of which is used for PhilHealth coverage such as in Pampanga.

Pineda added that about 85 percent of Kapampangans now have PhilHealth coverage.

PNoy and Pineda are not known as close political allies; Pineda is from the local party KAMBILAN, a coalition composed of National Unity Party, Lakas-CMD, Nationalist People’s Coalition and United Nationalist Alliance.