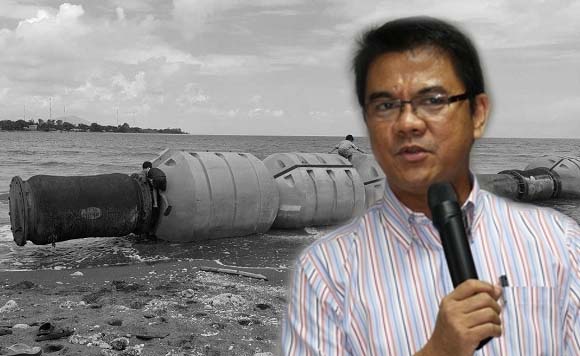 Zambales Vice Gov. Ramon Lacbain III said he and other local officials remain baffled as to the origin of the floating booms found by local fishermen about five kilometres from Cabangan town.

This is the reason, he said, concerned authorities should look deeply into the incident.

“The [origin of the] floating booms must be investigated. We have to know where these came from and why these were floating within the province’s waters,” Lacbain said.

As the presiding officer of the Sangguniang Panlalawigan, Lacbain pointed out that they can only look into the matter only after an investigation has been conducted by the Philippine Coast Guard (PCG) and the Bureau of Fisheries and Aquatic Resources (BFAR).

In the meantime, he said, the public can only speculate if the booms indeed came from China.

“We have to wait for the result of an investigation,” Lacbain said.

Cabangan fishermen discovered the booms with Chinese markings around 2 pm on July 24 and towed it back to the shore.

A floating boom is a temporary barrier used to contain an oil spill.

There have been speculations that the objects came from the Scarborough Shoal, also called Bajo de Masinloc or Panatag Shoal by locals, which is about 230 kilometers (124 nautical miles) west of Zambales.

Local fishermen have been driven away from the shoal by Chinese vessels since 2012.