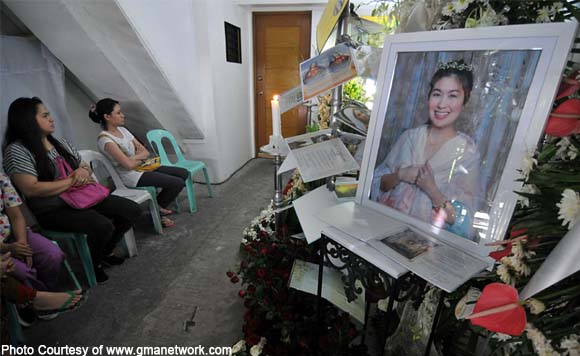 Arcenas, Dee’s estranged husband, could not be included in the hold departure list yet as no arrest warrant has been against him in connection with the murder case.

Instead, Pamintuan said Arcenas could be barred from leaving the country due to a 2011 arrest warrant for an attempted homicide case.

Arcenas has been on a four-year probation after his conviction in the 1997 case. His probation was supposed to end in November.

The attempted homicide case was filed with a Pampanga municipal court by Anne Manaloto, a sister of Arcenas’ former girlfriend.

Dee’s body was found buried in the backyard of a house owned by Arcenas’ girlfriend Angela Dychioco in Barangay Balibago on June 28.

Dychioco told police she helped Arcenas bury Dee out of fear for her life.

Dee’s sister Mary Ann has filed with the DOJ murder and parricide cases against Arcenas, who has gone into hiding.

The Pampanga Criminal Investigation and Detection Group is considering Dychioco and her mother for inclusion in the government’s witness protection program (WPP).

But Pamintuan said Angela could not be considered a state witness if evidence would show that she was Arcenas’ accomplice in killing Dee.